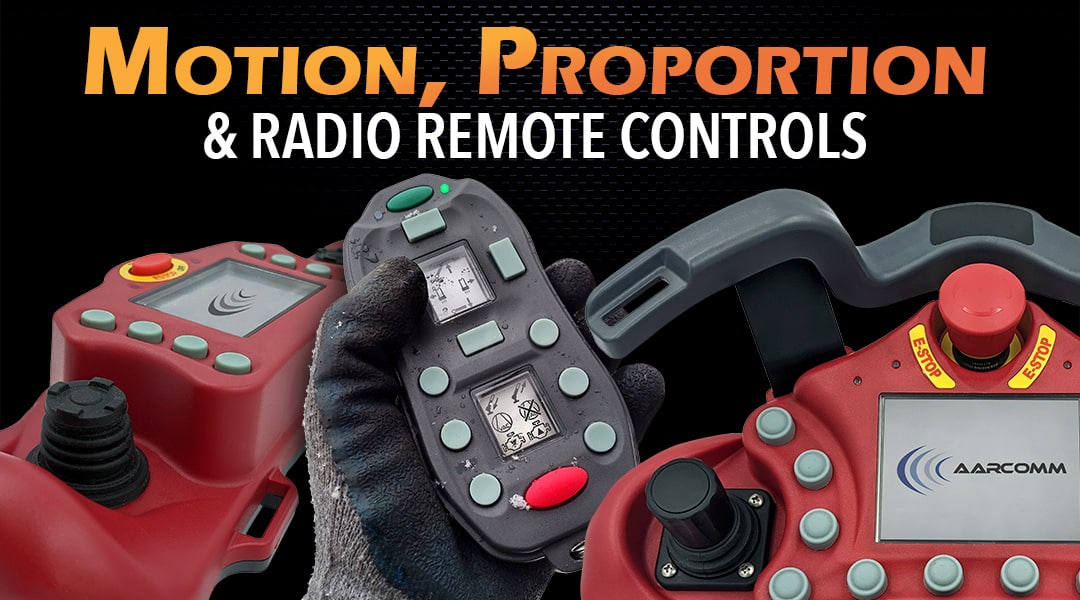 Aarcomm radio remote controls have been proven time and time again to be the most reliable and best proportional control systems in the market today. No matter if you work in concrete pumping, mobile construction or utilities, Aarcomm’s long-seated excellence in radio remote control technology allows us to build systems for a range of unique and demanding applications. One of the most important factors to building the most efficient remote control system for a particular application is how the remote regulates proportional and motion control of equipment. Some remote controls use joysticks to control motion while others rely on buttons, dials and triggers to get equipment and materials from Point A to Point B.

Aarcomm Systems has patented a form of proportional control where our handheld remotes use motion sensors to mimic the “pitch & roll” motion provided by 2-axis joysticks. With this method of control, operators can manage the speed and degree of motion by tilting the handheld up & down, or turning the remote to the left or right. The more you tilt or turn – the faster you go!

While the use of joysticks on industrial control systems is common, it may not be the most economical or efficient for operators in the long run. Some of the most common complaints from operators who use joysticks for proportional control is that these joysticks tend to break and become less waterproof with wear and tear. When they leak it can cause corrosion on printed circuit boards which can lead to pricey replacements and increased operator downtime as you wait for your remote to be repaired. The Aarcomm advantage is that the proportional control found on our handhelds (such as the Trident/TridentX and the Smart Dig Wand) comes without mechanical components that can become damaged.

Another benefit that Aarcomm’s motion control provides to operators is the elimination of a trigger for pistol grip style handhelds. This allows operators to effortlessly direct more of their focus into what’s happening directly in front of them, in the same way that our Smart Dig Wand dead man switch allows jetting operators to rest their trigger finger when controlling the flow of water!

And of course, less mechanical components like joysticks and toggles means that the remote control is physically lighter to hold for operators, which is particularly important toward the end of the workday. Holding heavy equipment can contribute to operator fatigue, so being able to remove these components makes the belly pack more comfortable for operators in the long run!

THE BENEFITS OF JOYSTICKS!

While some operators enjoy the freedom of flexibility that the Trident’s motion control technology can provide, others may prefer the feeling, intuitiveness, and precision of working with joysticks. Most belly pack-style remote controls use 1-axis, 2-axis, or 3-axis joysticks to control more complex motion, which is particularly beneficial for operators who tend to prefer a more hands-on, intuitive approach to operating the remote control. For some operators of concrete boom pumps and mobile cranes, joysticks may work better because they tend to provide higher precision than other types of components due to their easy usability and intuitive operation.

The flexibility and efficiency of joysticks on radio remote controls can also be compared to typing on a keyboard. When using joysticks, an operator can reach multiple buttons at the same time if needed, such as using the joystick with their thumb and another button with their index finger. If motion was being controlled solely by a control pad with buttons, it would be much harder and less intuitive for an operator in time-sensitive settings like a hectic construction site. Think of it like typing a paragraph with your index finger instead of multiple fingers. How much slower would it be to type the same number of words when using only one finger? 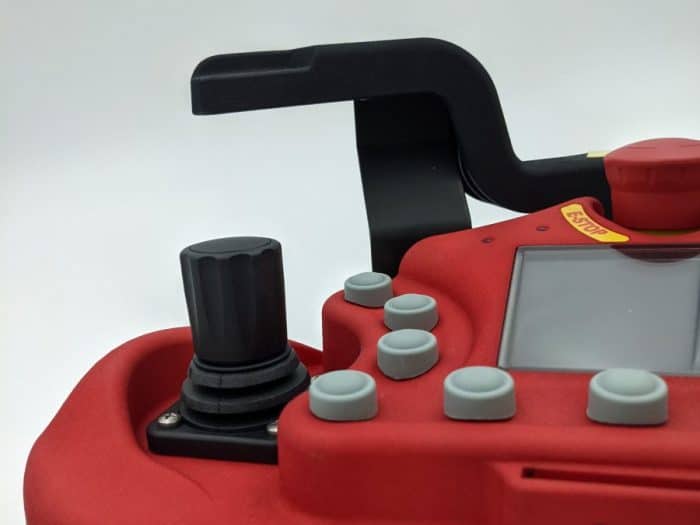 THE RISKS OF USING DIALS & TRIGGERS

As innovations in radio remote control technology advance, we are seeing less and less prevalence of dials and triggers in systems for mobile construction and utility equipment. Dials are mainly used to control speed and give you visual feedback for the speed of a function. Triggers are used to control the rate of speed of a function, or to enable a function to work. But again, as these are another mechanical component, there are some durability risks associated with them.

One of the biggest problems with using remote controls that rely on dials and trigger is that these physical, mechanical components are hard to make completely waterproof. After constant use in harsh environments, they become less waterproof over time and are more  to break, meaning an operator will likely have to deal with a damaged remote control sometime soon. To better meet the demands of harsh weather conditions and daily operations found on fast-moving construction sites, operators are advised to use remote controls with the least amount of different mechanical components as possible. Eliminating the chances of water damage to your remote controls will not only reduce downtime and repair costs, but it will also lead to less operator frustration while on the jobsite.

Reach out to our awesome team today to learn more about how Aarcomm is innovating radio remote proportional control to enhance your operations! Visit our Contact page to ask us a question or give us a call at 1.800.604.9218 to learn more.

Need assistance or just have a question?  You won’t find a more friendly and accommodating supplier. Learn more

Copyright © 2022 Aarcomm Systems Inc. All rights reserved. All registered and unregistered trademarks are the property of their respective owners